The Chief Secretary emphasized the importance of projects to protect canals and rivers from industrial waste and pollution in the proposed development projects. Apart from this, the project of garbage collection and sanitation equipment in different districts of Khyber Pakhtunkhwa was also discussed. The new annual development program also highlighted the importance of setting up education complexes for special people in the tribal districts as well as Plans for solar-powered irrigation projects and food and drug testing laboratories in Khyber Pakhtunkhwa were also considered.
Special attention is also being paid to education, health, communication, and infrastructure systems in Khyber Pakhtunkhwa in the forthcoming development program. The provincial government is developing a development program that will have a direct positive impact on the people. 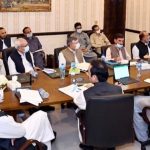 A Series of Consultative Meetings on ADP 2021-22 Has Been CompletedJune 12, 2021
ACS KP Met Resident Representative of UNDP Knut Ostby TodayJune 17, 2021 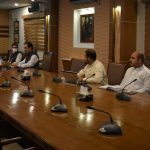