Khyber Pakhtunkhwa became the first province to issue a flood response plan to rebuild after the floods and cope with future climate change. Khyber Pakhtunkhwa Department of Planning and Development organized a consultation session with development partners with the support of the United States Agency for International Development (USAID) and United Nations Development Program (UNDP) Merged Areas Governance. The Flood Response Plan 2022 developed in collaboration with the Project (MAGP) was presented. This plan, prepared for the first time in the history of Pakistan, has been prepared in the context of the disasters of floods in recent years, in which the houses of more than ninety-one thousand families were affected while 674,000 people were forced to relocate. Through this plan, the Khyber Pakhtunkhwa government wants to provide better planning and early awareness of the risks faced by natural disasters in order to rehabilitate the flood-affected people and save them from being at the mercy of climate change. In his opening remarks on this occasion, Provincial Minister of Health and Finance Taimur Salim Jhagra said that the world is facing new and unknown dangers due to climate change, and it is very unfortunate that even though we have no role in creating this situation. But we are on the front line in facing their consequences. To protect against these threats, we will use available data and evidence, better relationships with our resources and development partners, and build our strategy on resilience to climate change and economic challenges. On this occasion, UNDP Resident Representative Qunot Osbi called the flood response plan of the Khyber Pakhtunkhwa government an important milestone and said that this plan covers three aspects to increase resilience against climate change. It includes the construction of better infrastructure, better efficiency of government institutions and better preparation at the district level, he stressed the development partners to fully support the Khyber Pakhtunkhwa government in this process. Additional Chief Secretary Khyber Pakhtunkhwa Shahab Ali Shah in his detailed presentation covered the situation and outlined the flood response plan. He said that according to the preliminary estimates, the provincial government to increase the capacity of the government against climate risks by one hundred and eight nine million dollars for reconstruction and an amount of thirty-nine million dollars is required for the restoration. In this regard, he emphasized that the use of additional resources will be effective only if the institutions engaged in this regard perform better. He said that for this purpose, the provincial government has established the Climate Resilient Infrastructure Fund (CRIF) which will be established with the help of public-private partnership at a cost of thirty-five billion rupees. Various methods of competition are being evaluated to prepare for future natural calamities. He said that people have the right to have a government that can face such situations and is fully prepared for them. The consultative session was attended by representatives of the British High Commission and the US Consulate and the Swedish Embassy and representatives of the European Union, USAID, World Bank, Asian Development Bank, FCDO, INL and KFW and others. He appreciated the Khyber Pakhtunkhwa government’s preparation of a comprehensive plan and speedy implementation of this process in the face of a national-level emergency. Secretaries of various departments of Khyber Pakhtunkhwa including Agriculture, Irrigation, Information, Environment, Health, Primary and Secondary Education, Communication and Works and officials of SDU, EPA and PDMA also participated in the consultation session. In his closing remarks, Provincial Minister for Health and Finance, Taimur Saleem Jhagra, thanked the provincial government for its development partners’ support and reiterated that the government would implement short-term and long-term initiatives. In order to increase resilience against climate change along with immediate reconstruction, he expressed his determination that he will take full measures to rehabilitate the people affected by floods and save them from such crises in the future. 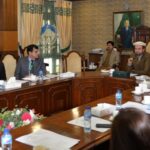