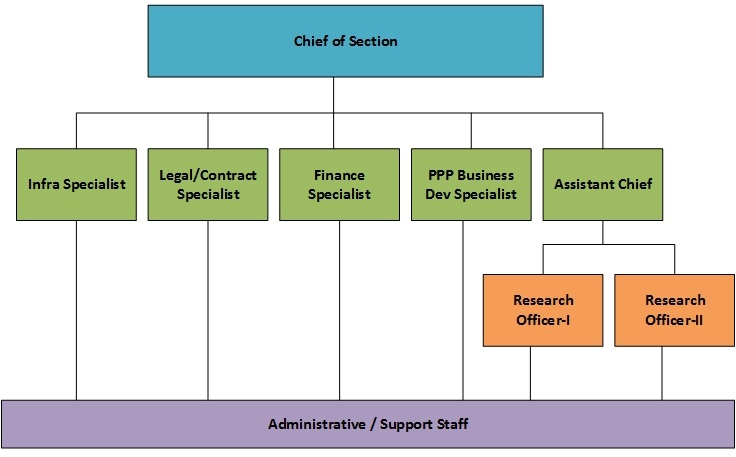 The current Government in Pakistan and Khyber Pakhtunkhwa in order to synergies development aims to bring private sector investment efficiencies in to government sector projects under the Public Private Partnership (PPP) arrangement.

The sister provinces Sindh and Punjab has already initiated a number of successful PPP projects in their provinces. Some of the best practices adopted by the sister Provinces are pro-active role of PPP Unit, having competent specialized personnel in their PPP Units and hiring reputed transaction advisory services from Market for Project Development and processing.

The PPP Unit being the central organ of the PPP and has mandated to provide backstopping support to the departmental PPP nodes and also work as secretariat to the PPP Committee. Moreover its function include technical evaluation of the PPP Proposal (PPP agreements) and provide recommendations to the apex PPP Committee

On analogy of the PPP Units of sister provinces, the PPP Unit Khyber Pakhtunkhwa needs to be strengthen to be able to initiate feasible/ bankable PPP Projects. The “Establishment of Public Private Partnership Support Unit in P&D Department” project has been approved earlier by PDWP at a total cost of Rs.260.5 million for a period of 26 months which is now proposed for revision on the reduced cost of Rs. 253.218

The PPP Support Unit is being proposed to facilitate efficient selection and implementation of PPP projects by the PPP Committee, PPP Unit and departmental PPP Nodes. The PPP Support Unit is being launched in view of capacity limitations of the provincial government with regard to smooth, efficient and timely processing of PPP projects. Considering that the PPP mode of project implementation is relatively new for the provincial government and that large amounts of public money will be spent on such projects, it is imperative that a dedicated, specialized unit be established for protecting and promoting the rights and interests of the provincial government.

The PPP Support Unit will comprise of the following pool of experts who will work under the Secretary P&D Department.

The aforementioned pool of experts will be aided by administrative support staff in the performance of their duties.

The PPP Support Unit will facilitate the PPP Committee, PPP Unit and departmental PPP Nodes in engaging private investors for the purpose of attracting private investment in needed projects which the provincial government can otherwise not undertake from its own resources. In addition to exploring new avenues for PPP projects, the PPP Support Unit will also be required to ensure that projects selected for being implemented through the PPP mode are legally, technically and financially feasible and that interests of the provincial government vis-à-vis the concessionaire are duly protected.

Main functions of the PPP Support Unit shall be:

The project will facilitate evolution of the PPP business model as envisaged under the PPP Act 2014. It is important to mention that PPP concept is a relatively new concept for the provincial government. Efficient design of such projects requires new skills and competencies. As of present, three entities i.e. the PPP Committee, the PPP Unit and Departmental PPP Nodes constitute the provincial government’s primary interfaces for processing of PPP projects. Nevertheless, all of the aforementioned entities lack technical, financial and legal expertise needed for the modelling, implementation and operation of such projects. Considering that large amounts of public money are involved in the construction and operationalization of PPP projects, it is imperative that the provincial government’s interests are duly protected in contracts awarded under the PPP Act. For the very reason, a dedicated PPP Support Unit needs be established in the Planning and Development Department for advising the PPP Committee, the PPP Unit and Departmental PPP Nodes on different aspects of PPP projects.