Chief Minister Khyber Pakhtunkhwa Mehmood Khan has directed the relevant authorities to identify flood-prone areas across the province and to plan the construction of protective embankments and flood protection walls etc. . He said that the government is trying to minimize the losses in any future flood situation. He was presiding over a meeting held to review the damage caused by the floods on Thursday. Provincial Minister for Finance Taimur Saleem Jhagra, Minister for Labor Shaukat Ali Yousafzai, Minister for Relief Iqbal Wazir, Minister for Higher Education Kamran Bangash, Special Assistant to the Chief Minister for Information Barrister Muhammad Ali Saif, Chief Secretary Shehzad Bangash, Additional Chief Secretary Shahab Ali Shah, Chief Minister Principal Secretary Amjad Ali Khan and Finance Secretary besides other related departments’ administrative secretaries and senior officials participated in the meeting.

Appreciating the role of political leaders, district administration, PDMA, and rescue and relief workers in the recent flood situation, the Chief Minister said that all the government machinery has done its utmost to save the people from the ravages of flood and to provide relief to them. They have shown great responsibility and their role is commendable. The performance of the provincial government institutions has been appreciated at all levels. On this occasion, the Chief Minister has directed the district administration to ensure transparency in the overall process of distribution of relief items and clarified that financial assistance and other relief items should be distributed only to the flood victims and the rightful should get their rights. No negligence or omission will be tolerated in this regard. Earlier, while giving a briefing to the Chief Minister, it was informed that chlorination tablets and mosquito nets are being provided to the victims keeping in mind the fear of possible epidemics in the affected districts. Similarly, the victims who were evicted from their homes due to floods are being ensured the supply of clean drinking water through water tankers. The meeting was informed that according to the initial estimate of the losses, the agriculture sector has suffered a loss of billions of rupees, and further assessment is going on in different districts, until the completion of which the estimate of the loss may increase further. Similarly, according to the preliminary assessment, a total of 1450 km long roads have been affected by floods. On this occasion, Additional Chief Secretary Shahab Ali Shah gave a detailed briefing to the participants regarding the initial estimate of the damage to houses, roads, bridges, schools, health facilities, agriculture, irrigation and other sectors in addition to the loss of life and property in various districts. . He said that the data of losses is being collected by the district administration. An online portal has been developed for this purpose, the details of which can be viewed online. The participants were informed that the timely evacuation of a total of 364,000 people was made possible in various districts, which helped to reduce the loss of lives to a considerable extent. Similarly, the provincial government’s proactive measures, good governance, anti-encroachment campaign, protective dams and floods. Due to the construction of protection walls, losses were also reduced, otherwise, the losses would have increased manifold. The meeting was further informed that the presence of doctors and related staff has been ensured in all the medical centres to meet the medical needs of the people displaced from their homes due to the flood. While informing about the nature of the flood situation in various districts, it was said that the districts of Upper and Lower Dir, Swat, Upper and Lower Kohistan, Charsadda, DI Khan and Tank have been badly affected by the floods, while the districts of Upper and Lower Chitral, and Mansehra are relatively less affected. According to the preliminary assessment, more than six lakh people have been displaced in the province due to floods. The Chief Minister on the occasion directed to streamline the aid received from donors and social organizations/personalities to ensure efficient and equitable distribution of relief items and packages. The Chief Minister further said that the compensation will be paid to the flood victims as per the revised rates. 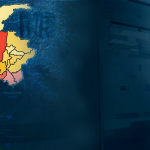