According to briefing under the Peshawar Revival Plan, work is underway in seven different areas including encroachment elimination, renovation, tree planting, and traffic flow. According to briefing 203 kanals of government land has been relinquished so far in operation against encroachments, Wall chalking has been cleared from 28 km walls. Standardized boards have been installed at 700 shops, More than 750 balconies and rafters have been removed, 6,000 flags have been removed from poles, 750 temporary cabins in the factory market have been removed. 550 shops in the parking lot were demolished. Work is underway to install LED lights on Ring Road.  More than 1.5 lakh saplings have been planted in different parts of Peshawar so far this year under tree planting campaign. PC-1 of various projects in the city under Cities Improvement Project has been sent to Central Development Working Party for final approval. 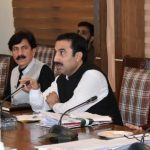 Review Meeting on the Beautification and Uplift of Divisional Headquarters of KPAugust 30, 2021
Workshop on the Preparation of Annual Development ProgrammeAugust 31, 2021 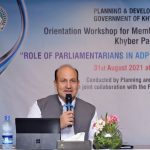