Young people and women need guidance to benefit from kamyab jawan programs, and insaf rozgar schemes. Provincial governments should work with chambers of commerce and industry to educate youth about government loan schemes. There is a need to make it easier to do business in the provinces to attract investors. The development of the minerals and mining sector will enable the development of the people of the province and the provision of employment to the local population. Alternative dispute resolution system in newly merged districts of Khyber Pakhtunkhwa will provide quick and cheap justice to the people of merged districts. Alternative dispute resolution system will help reduce burden on judiciary in former FATA districts, the president said.

The president was informed that KP government is focusing on development and improvement of newly integrated districts of former FATA and the administrative integration of former FATA districts in Khyber Pakhtunkhwa has been completed successfully. According to the briefing 901 projects worth Rs. 491 billion have been approved for integrated districts. The president was briefed on progress of projects to improve education, health, roads, energy and administrative infrastructure in integrated districts. The briefing further said that all ongoing development projects in the province will be completed on time.

The President highly appreciated the three-year performance of the KP government. The President commended the provincial government for holding regular consultative sessions for resolving the issues of the people of the merged districts. The President expressed satisfaction over the extension of Health Insaf Card facility to integrated districts for the provision of quality health services. 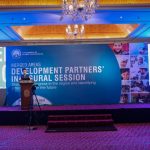