Formation of the Second Phase of AIP for Integrated Districts

On the special instructions of Chief Minister Khyber Pakhtunkhwa, Mr Mahmood Khan, Department of Planning and Development, Government of Khyber Pakhtunkhwa has initiated a consultation process for the formation of Phase II of Accelerated Implementation Program (AIP) in all integrated districts.

The purpose of these consultative meetings is to ensure that public priorities and aspirations are taken into account in formulating plans for the second phase of AIP for the next three years after the ongoing AIP Phase I for the implementation of tribal development. So that development measures are in line with local needs and ground realities. 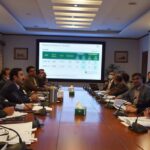